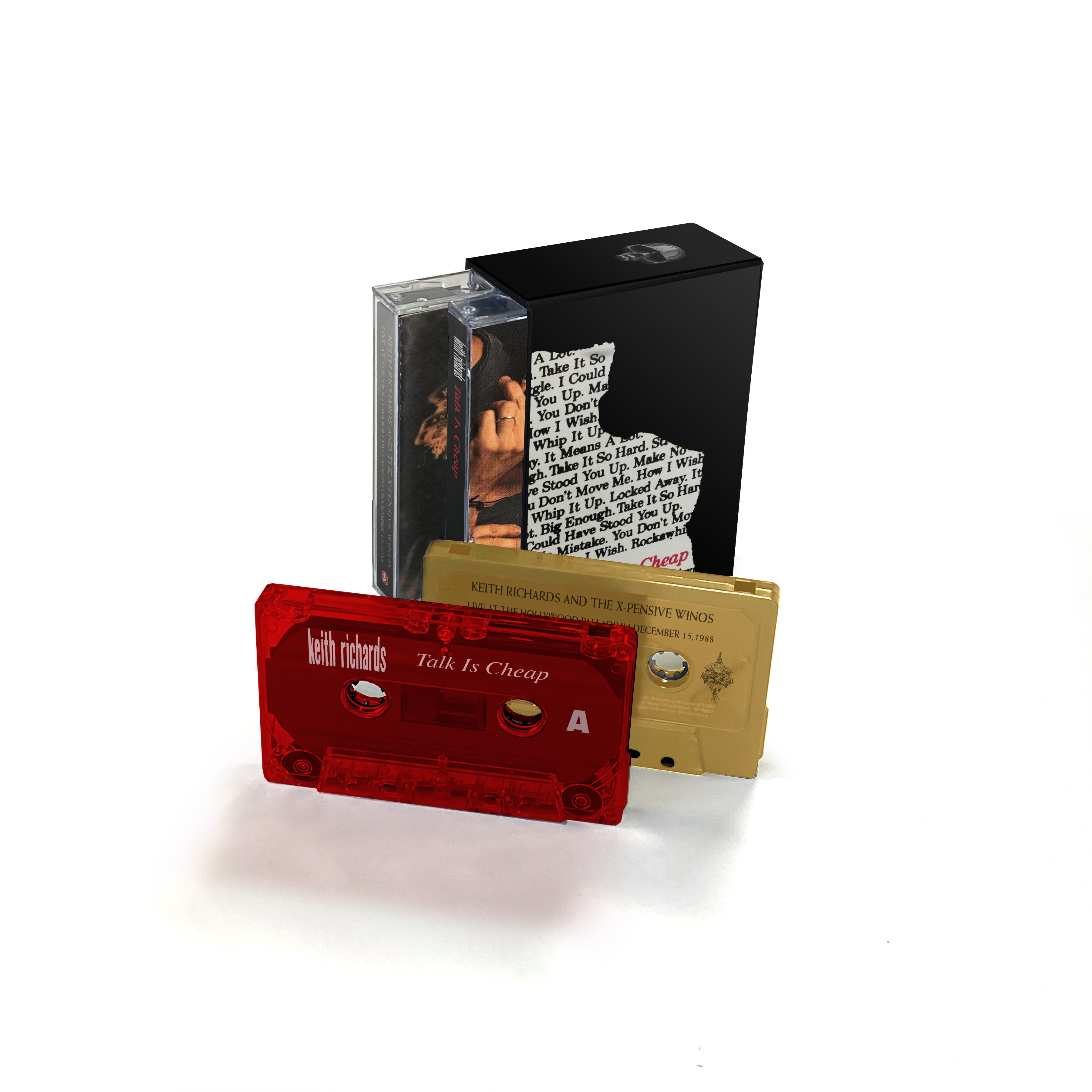 This Saturday (June 18) we are excited to release a double-feature Record Store Day exclusive! Grab Keith’s 1988 debut solo album, Talk Is Cheap, on transparent-red tape cassette, and Live At The Hollywood Palladium—recorded during the Talk Is Cheap tour on December 15, 1988 with the X-Pensive Winos—on transparent-gold cassette.

Featuring some of the greatest Keith hits such as “Take It So Hard”, “How I Wish”, “Whip It Up (Live)”, “Happy (Live)” & more. There are only 650 copies available exclusively at independent record stores near you so you better move quick!

This collection also includes an 88-page book with never-before-seen photos, reproductions of handwritten lyrics, reprinted essays from the album’s release, and more, plus an archival envelope containing exact replicas of promotional and tour materials from Keith’s archive.

Main Offender is the latest treasure trove of Keith Richards material to be released and follows last year’s Live At The Hollywood Palladium and the 2019 unveiling of his now legendary, first solo album Talk Is Cheap.

The album was originally released in October 1992, four years after Talk Is Cheap and features the much-loved X-Pensive Winos: drummer and long-time collaborator Steve Jordan (who recently drummed with the Rolling Stones on their 2021 No Filter Tour of the US), guitarist Waddy Wachtel, bassist Charley Drayton, keyboard player Ivan Neville, singer Sarah Dash and backing vocalist’s Bernard Fowler and Babi Floyd.

The captivating 10-tracks on Main Offender include the electric singles ‘Wicked As It Seems’, ‘Eileen’ and ‘Hate It When You Leave’. The album was produced by Keith Richards, Waddy Wachtel and Steve Jordan. The bonus live album was mixed and produced by Jordan as well.

“This is the second time around & the Winos are kind of developing—and if I can keep those guys together for as long as I can, it’s one of the best bands in the world. It’s a very intriguing band and the potential is only just starting to show itself.

If I hadn’t have taken the Winos on the road, this record would probably have been totally different than it is.

I tried to avoid making too much sense on this record because to me that ambiguity and mystery, and a little provocation to make you think, is something far more powerful and more important than just wagging your finger and saying, ‘I know what he’s saying don’t do this, do that.’ If you’re a musician, silence is your canvas and you never want to fill-in the whole thing because then you’ve just covered it all…

One of the most interesting parts about music is where you don’t play.”

The new, super-deluxe Main Offender boxset includes an exclusive collector’s case, housing a removable, hand-numbered print of the original, uncropped album cover portrait. Inside is a unique Art-Book with the album pressed on Smoke-Coloured vinyl.

The Main Offender LP & CD are newly remastered under the supervision of original producer & X-Pensive Wino, Steve Jordan. The exclusive Winos Live in London ’92 album puts you right in the pit at the show with previously unreleased versions of “Eileen”, “Hate It When you Leave”, “Happy”, and more.

Keith Richards & The X-Pensive Winos – Live At The Hollywood Palladium Out Now Nov 13, 2021

Keith Richards & The X-Pensive Winos: Live At The Hollywood Palladium is out now! Order your copy HERE.

New video for 'You Don't Move Me' out now! From the X-Pensive Winos: Live at the Hollywood Palladium album out November 13!

Hate It When You Leave Video Premiere On RollingStone.Com Oct 21, 2020

New video for 'Hate It When You Leave' premiere on RollingStone.com now!

The Hate It When You Leave / Key To The Highway 7" release is available in participating Record Store Day stores Saturday, October 24.

On December 15th, 1988, Keith Richards and his incomparable band, The X-Pensive Winos, played the Hollywood Palladium. It was the penultimate show in a 12 city US tour and a night both band and audience will never forget. Now this legendary concert is available for the first time as a limited edition box set.

Across all formats – Boxset, CD, 2LP vinyl & digital - Keith Richards leads his absolutely smokin’ band through one classic after another including his landmark solo tracks ‘Take It So Hard’, ‘Make No Mistake’, to Stones classics ‘Happy’ and ‘Connection’. Exclusive to the Boxset and Digital formats are 3 previously unreleased tracks ‘Little T&A’, ‘You Don’t Move Me’ and the Lennon-McCartney penned hit ‘I Wanna Be Your Man’.

“The real stuff,” is how Keith Richards describes The X-Pensive Winos.

“I wish to thank all the guys in this crazy beautiful band. Something to love. I know I do.”

Live At The Hollywood Palladium comes as a special deluxe box set, presented in a matching folio, wrapped in a black cotton replica of the tour shirt sold that night, complete with a satin VIP pass on top, also including an impeccable all-new essay ‘The Loosest Tight Band You’ve Ever Heard’ by renowned rock writer David Fricke. It comes as a reissue after the original album was released due to popularity of the bootlegs.

‘Live at the Hollywood Palladium’ Tracklisting

Reproductions of archival materials from the tour including:

Other formats available include:

By signing up you agree to receive news and offers from Keith Richards. You can unsubscribe at any time. For more details see the privacy policy.